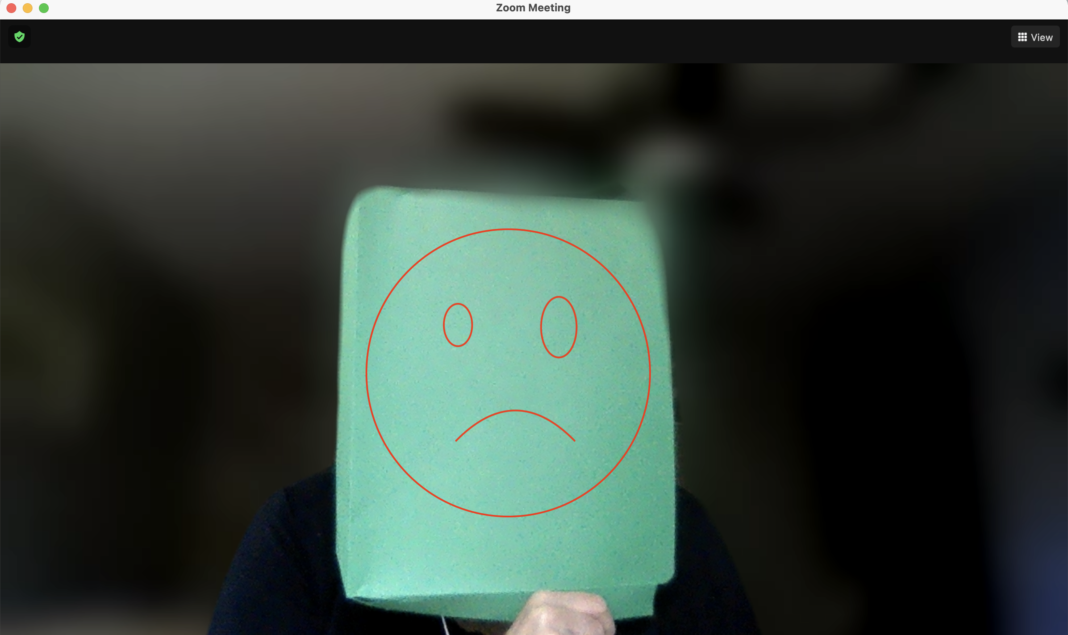 As she sat outside alone on one of her favorite beach chairs, Valerie Kusner put her head in her hands and knelt over as she thought of all her school assignments due that night. The morning sun beamed down on her, reflecting on her new Ray Ban glasses, but behind those lenses, her eyes sulked. She kept in mind that her current situation with living in South Hampton for the summer alongside three friends was better than her usual environment. Being bombarded by her parents as she woke up each morning didn’t help the already overwhelming stress of the constant supply of assignments she received each day. Despite the warmth in her new backyard and the meal she looked forward to at her local bagel shop, she couldn’t help but dread the daily Zoom session she had with her class later that morning.

Concluding his daily regimen of running 4 or more miles and a bodyweight focused workout, Joshua Bordwick sat on his porch steps, soaked in sweat, but with a smile. The 90 degree weather didn’t phase him, but knowing what he had to face when he walked back through his front door did. Even with this, he repeated to himself that his situation was temporary. He knew his parents would be happy with his grades and his working hours, and that his sister was happy to have him home from school. Most importantly though, he reminded himself that his family was safe. Despite this, his smile faded and his eyebrows squeezed together as he thought of the challenge of growing used to his new routine. He longed, more than ever, to be back at school with his teammates and professors, but for the time being, he was ready for the upcoming challenge of being locked in for the pandemic.

As the COVID-19 global pandemic continued its devastation around the world, numerous implications of long lasting effects on individual’s mental health have come to light. According to the study conducted by JMIR Mental Health, placing stay-at-home orders upon the public created an amplified indication of suicidal ideation, anxiety, negative thinking and lack of sleep for many individuals. The notion of being locked inside correlates closely to why people, specifically students, have been losing their motivation. “Students and adolescents need company from other students and adolescents,” explained Dr. John McGeehan, a psychiatrist from New York City with a background in adolescent mental health. Statistics on where students feel most affected have also been posed by the Journal of Medical Internet Research, claiming that out of 195 tested subjects, 90% said the health of their loved ones, 90% said difficulty concentrating, 85% said sleep deprivation, 85% said lack of social interaction, and 80% said a decrease in academic performance were primary concerns. The pandemic not only created turmoil for people last year, but as time went on while locked away in their home, individuals started to see their own habits shifting due to their current circumstances.

Joshua Bordwick ‘22 and Valerie Kusner ‘23 dove back into their working lives after being locked inside for months. When asked about her circumstances during the most intense period of the pandemic, Kusner revealed that she began at home with her parents, but quickly moved to a home with a couple friends to quarantine in. “I would find myself, many mornings. having difficulty starting my day,” said Kusner. “I wasn’t always sure why. I felt I had nowhere to really go, so a lot was cut out of my routine too.” Individuals rely on their daily routines to be able to stay on track with their lives, and eventually find space to grow. “When I finally moved in with my friends, it was sort of a shock I would say,” said Kusner. “This was just because I’d become used to my parents being the ones telling me to do things, then I go live with my friends and they don’t tell me to do anything. I had to continue to figure out my days myself from that point.” Being around parental guardians for such a dense period of time undoubtedly has taken a toll on students’ sense of independence, which has led to lack of confidence in their work and motivation for growth.

A key factor to students’ lack of motivation has derived from the scarce interaction they have, even when living with friends. “School was super different online, but seeing my friends struggling with the same issues made me feel more at ease,” said Kusner. “I think this was just because I was able to be around people I relate to.” With a lack of interaction, Dr. McGeehan emphasized how students not only need other students around them, but in the developmental stages of social cognition, he stated that, “if the pandemic were to last longer, you know, than, say, one year, we’d see a generation of unmotivated kids. Technology today doesn’t help. Where do you think kids look to for connection in a time like the pandemic? Social media. That is certainly not a place to find motivation. In fact, it deteriorates that sense in students.” Having students to relate to is imperative in the development of cognitive thinking within an educational context, as Dr. McGeehan explains, “having people you relate to through work creates an environment in which a cycle occurs. This cycle consists of students almost feeding off of each other for motivation. One person sees someone working, that instantly creates the notion of work in one’s mind. Even when they don’t realize.”

Without constant, real social interactions, students have found themselves distracted by online interaction. Such extreme usage of these platforms corrupts adolescents’ ability to form motivation and social cues. “I am truly worried for students coming out of the pandemic,” said McGeehan. “Even when life feels normal again or people go back to their lives in whatever way they classify as normal, the lasting effects of the pandemic will stay relevant. I feel like I’ve seen that with my clients even today. We aren’t anywhere near where we were a year ago, but habits, mindsets and rapid change of environment during the pandemic surely has created a new issue in the aspect of mental health in students.”

“With so much time, I find myself needing to get up early to get my work done, or I won’t later in the day,” said Kusner. “I think I have so much time. The pandemic kind of put that in perspective for me just because of how much more time I was given, not having to really go to school and all. Also not being able to see my friends, which really took a toll on me.” With major disruptions in both interactions with friends and a daily routine, students such as Kusner have struggled to get back to their normal habits.

For students such as Bordwick, sticking to sports and setting aside time for school helped him function throughout his day. He too lived with his parents in lockdown, but it didn’t impact him in the same way. “I didn’t find them annoying at all during the pandemic, but rather helpful,” said Bordwick “I always go to them for help. My dad especially as he was an athlete when he was younger too.” Having someone to relate to is a primary motivator for students. Despite this, Bordwick claimed that he still struggled with disruptions in his own routine, which he takes extremely seriously. “I really take pride in my routine. It doesn’t involve other people or revolve around some sort of outside motivation, for the most part. School helps me just because I feel like life is moving around me. I don’t really look to other students for motivation though if that’s what you’re asking.”

As life moves forward, we see students like Bordwick finding motivation in not only their close surroundings, but in themselves as individuals. From this, we see a new sense of independence arising for students. With the aspect of athletics as well, struggles seemed to never truly arise for Bordwick as he said, “I workout every day. It’s something I’m very committed to. It’s because I have aspirations for after college that involve my health and how in shape I am. I want to join the Coast Guard when I leave school.”

For a student athlete like Bordwick, staying grounded and focused on the future after the pandemic revealed motivation he had not realized for himself before. As many students begin to relate to, looking towards the future provides hope. Setting goals, big or small, poses a key component of sticking to one’s daily practices and commitments. For example, Bordwick describes his mental process on a daily basis as he states, “I kept trying to live my days as if it wasn’t a thing. I knew one day we’d get back to normal. If I sunk away from my routine, I’m not sure what I’d do. I’d probably go through each day sitting around, because I could.” Never straying away from his routine, Bordwick adapted his life in lock down on a minimal level.

In the remaining period of the global pandemic, students must find their motivation wherever they can. Whether it be from other students, their family, or simply their own future aspirations, it’s imperative for students to have a focus that brings them away from their current circumstances. Being back at school has created a new sense of normalcy for students, but as mask wearing continues, vaccines roll out, and new regulations continue to be posed, students of all kinds continue to struggle with finding motivation in their daily lives. Whether this is to continue being a problem in the near or distant future will reveal how the coming generations look back on those who lived through the COVID-19 global pandemic as a student.

Now back at school, Kusner sat on a blanket in the grass outside of her living space in Benfer Hall. She sipped her Dunkin Donuts coffee that contained a splash of almond milk, a new addition in her diet. She typed quickly on her computer, but it wasn’t due to a sense of anxiety, rather, her eagerness to finish her work so she could go back inside to her friends who were watching a movie. Her pink hoodie covered her to protect her from the evening wind, which pushed the pages of her textbook beside her. Finishing her assignment, Kusner closed her MacBook and sat still for a moment. She looked down the hill in front of her towards the rushing leaves of the trees, gazing beyond them at the mountains in the distance. With the last sips of her coffee, she stood up, thrust her blanket over her shoulder and lifted her pink mask over her face. Kusner let out a sigh of relief, knowing not only that she was done with her work for the day, but that as she walked back into her suite, she’d find herself back to where she had desired to be for months. To make things even sweeter, she knew she’d be doing it again the next day.

Our lives will never be the same again

Is it okay to be selfish in a pandemic?