The Hugo Awards celebrate science-fiction literature, a genre that has dominated pop culture for years, and it seems fitting that this year the fanwork site Archive of Our Own was honored with the award for Best Related Work.

Archive of Our Own (AO3) essentially stands as a monument to pop culture, hosting millions of fanfictions, podfics, fanart and more, representing everything from Harry Potter and Star Wars to Les Miserables and Naruto.

Browsing AO3 brings you stories of Percy Jackson attending Hogwarts or Harry Potter going to Camp Half-Blood, the characters from Newsies existing in modern day, or the Teen Titans just hanging out between missions. There are stories about love, redemption, high school shenanigans and found family, ranging in lengths from a few sentences to longer than some novels, all created by fans for no other reason than it made them happy.

With over two million registered users posting regularly or just browsing and more people visiting the site without having an account, it is likely that many people at Muhlenberg have a connection to AO3. Francesca Coppa, an English and Film Studies professor and one of the co-founders of the site, has a stronger connection than most.

Coppa has been a part of fandom culture since she was a child and has watched it change over the years. “Fandom had been in a place of disruption around 2006-2007,” she explained.  “It was really clear that people were looking to try to develop Web 2.0 social networks.”

Web developers began noticing that fans were creating interesting content that drew people to their sites, and the developers sought to monetize it, Coppa explained.

“We didn’t want them to monetize us for any number of reasons,” said Coppa. “We didn’t even trust them to do a good job.”

AO3 and the Organization for Transformative Works, the nonprofit that runs the site, were created in part to protect the ability to create fanworks “from commercial exploitation and legal challenge,” as their mission states.

“The original post to the Archive of Our Own said: if we don’t build our own front door, they’re going to build a front door that’s called fandom,” Coppa said. “We wanted to create a place where new fans would come and find us and not find ‘McFandom.’ There was a real sense that McFandom was out there; AO3 is the antidote to that.”

AO3 was built by fans, for fans and is still run and managed by fans. Coppa and other co-founders had experience working within fandom as archivists, convention organizers, etc. and used those skills in conjunction with others who also had experience as lawyers, accountants, public relations and, most importantly, coding to create the site.

“That software was built from nothing; from a blinking cursor; completely from scratch as an open source project,” Coppa said. The site has a myriad of features that make it an accessible and fun experience, and it notably lacks features found in many commercial media like data mining and tracking.

“We built a non-toxic social media platform,” Coppa said, which is why she felt the site earned the Hugo.

AO3 co-founder Naomi Novik and a group of AO3 volunteers accepted the Hugo at the award ceremony in Dublin, Ireland, on Aug. 18. In her speech, Novik pointed out that AO3 is “a nonprofit and non-commercial community space built entirely by volunteer labor and user donations on the principle that we needed a place of our own that was not out to exploit its users, but to serve them.” At the end of her speech Novik asked that the lights be raised and for anyone in the audience who was a part of the AO3 community to stand and be recognized, with almost half the audience standing including other Hugo nominees and winners.

While Coppa had chosen not to attend to spend time with her family, she did watch the livestream of the awards and was overwhelmed by the fan response. “It was for everybody. It was for the whole site: the architecture, the users, the community. I think people took it very personally.”

In the wake of the win there was an outpouring of excitement on Twitter, and Coppa was especially touched by the response of Chinese fans, many of whom are still new users. “It was a very international, feel-good moment,” she said.

While the Hugo brings AO3 and fanfiction into the spotlight, Coppa fears that even before winning the award, fan culture was becoming mainstream in another attempt to be commercialized and used by companies to build their brands. She referenced the rise of Disney as a media conglomerate and their creation of events like the D23 Expo, an event that would have traditionally been organized by fans but is now being controlled by a company.

“Companies are starting to hire, like a social media manager, a fandom manager,” Coppa said. “I don’t want to be managed…I worry that a lot of younger fans are a little too close to the powers that be. I don’t care about the creators, I care about fandom.”

To Coppa, the community and creativity of fandom is what is most important.

“It was a pretty non-mainstream Hugo. It was unusual for them to give it to a website, to give it to a community.” Coppa added that even the acceptance for the award was out of the ordinary. “I want [fandom] to be something special…I want us to stay a little more punk rock.”

Regardless of fandom’s place in larger public consciousness, it is undeniably popular.

“People say that young people are not literate, and I think that’s clearly nonsense,” Coppa said. “Lots of people are literate, and why should people not write fiction as a hobby regardless of age?”

Coppa explained how “it can be fun to put words in order” and that writing fanfiction provides an outlet to write for pleasure. She said that college students especially engage because after writing a large paper, there’s a sense of relief and joy to use that same skill set in a purely creative outlet.

“To be in touch with the fact that reading and writing can be fun is a really good thing for college students to do,” Coppa said. “You should think of yourself as a writer. I think it’s a wonderful thing.”

“Write for yourself,” Coppa said. “Write for fun. Write for your best friend. Write because somebody you know who will read it is going to be really happy — even if that person is you.” 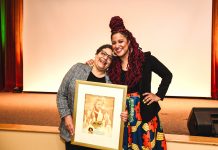 Black Excellence Through the Ages