The Muhlenberg Weekly Serving the Muhlenberg College Community Since 1883
Home Arts & Culture FundCab delivers on fun, stories, heart, and an important cause 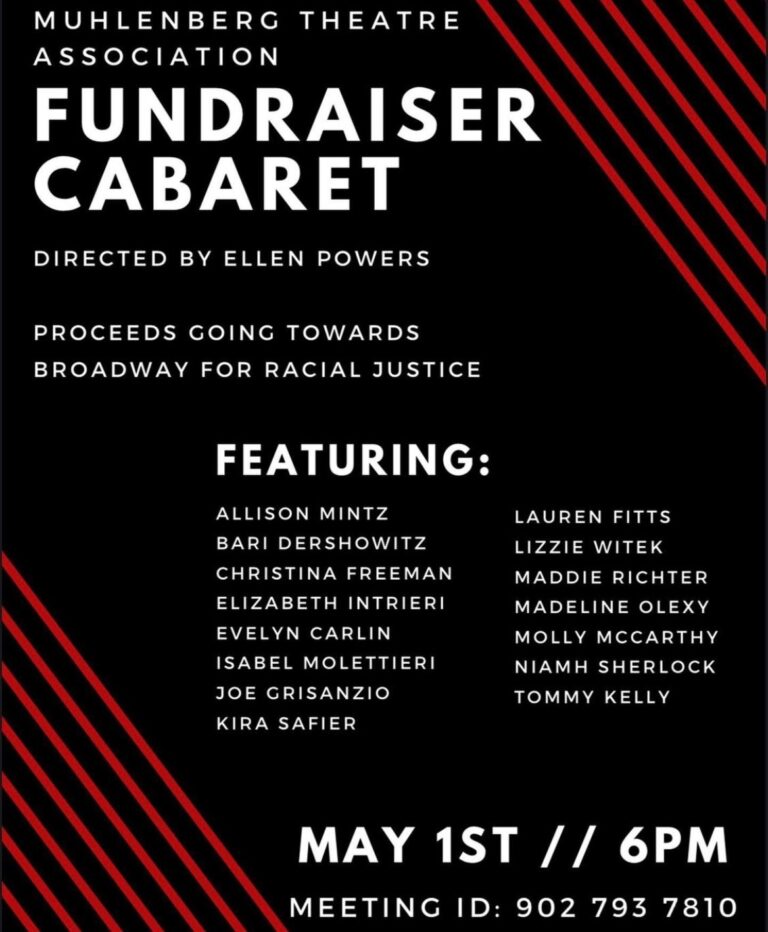 The art of storytelling graced the virtual stage this past weekend with “FundCab,” a musical theatre cabaret to raise money for Broadway for Racial Justice. The spectacle included a wide variety of performances which all showcased the central theme of storytelling and how those stories impact one’s artistic self and how they view the world.

Ellen Powers ‘21 directed the piece and thought storytelling was the perfect theme for the show as it was a way for everyone to share their experiences of what they have gone through during this crazy time. The auditions for the show revolved around this concept as Powers wanted to see the art of storytelling through these performers and their song selections. Then, the director worked with the artists on these songs once a week during brief meetings to make sure the emotional connection was there.

“I worked with them on the acting of the songs and making sure all of their acting choices were as clear as possible for the Zoom environment. This also played a lot into how I had the actors emphasize the theme of storytelling that I wanted FundCab to have. Each of the songs has a story arc to them, and a lot of them featured characters in intense emotional situations or making major decisions,” said Powers.

The audience was filled with various members of the Muhlenberg community and also supportive parents and friends of the performers. The number of participants fluctuated between 80-90 audience members with the Zoom call even reaching 94 attendees. This was of course including the performers, but it still is an impressive feat nonetheless. The show connected each performance with a story and also a feeling of hope, love or connection. The musicals featured ranged from “Into The Woods,” “Frozen,” “Carrie” and “35mm,” showcasing the wide variety of talents and artistic choices. One of the most powerful performances from the night was McCarthy with her rendition of “With You” from “Ghost.” This performance resonated with the virtual audience members through the power of McCarthy’s voice and the chat flooded with emotional comments and digital tears. The song also highlighted the deep and immense loss that has been felt during the pandemic.

Witek also captured the heart of the audience with her performance of “Marry Me a Little” from “Company.” The iconic song is from the popular Stephen Sondheim musical and Witek reflected the recent Broadway and West End revival with the gender bent role of the main character, Bobbie. Witek declared, “In the recent West End revival, Bobbie is played by a female identifying actress, so the key of the song sat really well in my voice. I love singing the song I chose, but I also love telling the story. I won’t be able to play this role for a while because she is significantly older than I am, but this cabaret setting was the perfect place to sing it.” Witek’s performance is emotional and powerful while also keeping with the emotional currents and energy of the iconic musical. The piece is also perfect for all the people who have been lonely this past year and longing for comfort in some form of love. Witek expressed appreciation for Powers and her direction for herself and the entire company.

The rehearsal process was quite simple as performers met with the director once a week to work on their songs, as mentioned above, with added group rehearsals for the two ensemble numbers. Plus, a large majority of the cast takes vocal lessons, so they were able to enhance their songs during these private lessons. The two ensemble numbers were a powerful opening and closing with various performers featured while singing and dancing to the group songs. The opening piece was perfect for the theme of the show with “If You Knew My Story” from “Bright Star” to set the mood and invite the audience on this journey. The closing piece involved lots of movement and synchronization between the singers as they delighted everyone with “Believe” from “Finding Neverland.”

The event was a huge success as “FundCab” raised over $300 for Broadway for Racial Justice. Britney Jara ‘23, the production manager, reminded audience members to donate throughout the performance to make sure it was a successful night. In addition to the money raised, the performers also grew and developed their songs and artistic talents. “The most rewarding part of directing ‘FundCab’ was getting to see how much the performances from the cast evolved and improved from the beginning of the rehearsal process to the performance. Each of my cast members is extremely talented, and their performances started in a great place, but it was wonderful getting to work with each of the actors to shape the performance to be the best it could be,” said Powers.