Home Sports Mules on the rise in McLean’s first season

October 16, 2017, marked a new era for the Muhlenberg wrestling program. After the unexpected resignation of head coach Sean Lally in late September of 2017, Muhlenberg hired an accomplished wrestling alumnus Jason McLean as their new head coach.

Despite being hired less than a month before the season started, McLean was prepared to step in his new role and lead the talented and up and coming wrestling program to new heights for the coming season. At the beginning of the season, McLean described the team as “young but seasoned” and had stated how essential it was to “make it known to the Centennial Conference and Region that we won’t be at the bottom anymore.”

So far this season the Mules have lived up to their coaches prediction.

They have earned many accomplishments, which include going 4-0 at the Scotty Wood Duels, winning against two Centennial Conference opponents — including ending a sixteen year losing streak against Ursinus —  staying competitive in many duels against talented conference foes, and having many individual wrestlers defeat difficult opponents during their bouts.

It’s important to remember that the college wrestling season is extremely long, physical, and arduous. I’d liken it to a multi-day contest like a bike race or a grueling decathlon. There are going to be good days and bad days.” – Coach Mclean

Heading toward the Centennial Conference playoffs, McLean has praised the team’s growth and work ethic over the season and notes that the win over Ursinus was a major highlight for this season.

“We have grown so much as a team and a program. Obviously beating Ursinus for the first time in 16 years stands out but these guys are right at the verge of being highly successful,” said McLean. “Even when disappointed, we have not faltered in our work ethic and determination. Everyone is in for the long haul and end game.”

After McLean was hired he said that the preparation process was going to be similar to what it was in previous years because “wrestling is wrestling.”

“Intensity, organization, game planning, and working towards micro goals, as well as fine tuning individuals strong points are a focus. All things considered, we may have intensified the overall process,” he added.

Sure enough, this intensified process has remained a constant throughout the season and heading into the Centennial Conference playoffs.

“It’s important to remember that the college wrestling season is extremely long, physical, and arduous. I’d liken it to a multi-day contest like a bike race or a grueling decathlon. There are going to be good days and bad days. Your going to feel horrible more than you feel great. We have to prepare for all that both mentally and physically. The mind has to say ‘yes’ and ‘go’ when the body says ‘absolutely not.’ These guys are running, lifting, drilling, and beating up on each other on a daily basis. Even with a day off here and there, their minds still need to be in it. The mental part is what differentiates the highly successful from the not,” said McLean.

With the playoffs in the horizon, the team’s preparation will not change significantly, however focusing on a wrestler’s individual needs are important. “We also have to focus on guys individual needs. If we need a guy to bump up, maybe we put him with a heavier teammate. If a guy needs to work his conditioning, then focus on that,” he added.

Over the next five weeks, the Mules have lofty goals and realize that ending the season on a high note helps the program out in the future. McLean remarks that the team has goals for individual wrestlers and for the program as a whole, remarking that the team must “finish strong in dual meets and send our seniors off the right way as well set the bar for next season.”

The path to a strong finish starts Saturday, Feb. 9 when the Mules compete in the Centennial Conference Championships in Lexington, Virginia.

“Individually, we need to put some guys on the podium and Centennials and NCAA Regionals. Once, again what happens over the next 5 weeks or so sets the tone for next season and the future of the Muhlenberg Wrestling Program,” said McLean. “Our goals are high. When we attain those, we will set some that are higher.” 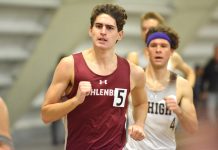 On track for the championships 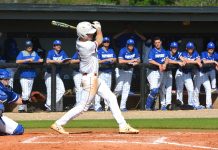 Berg baseball ready to step into the batter’s box 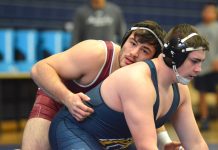