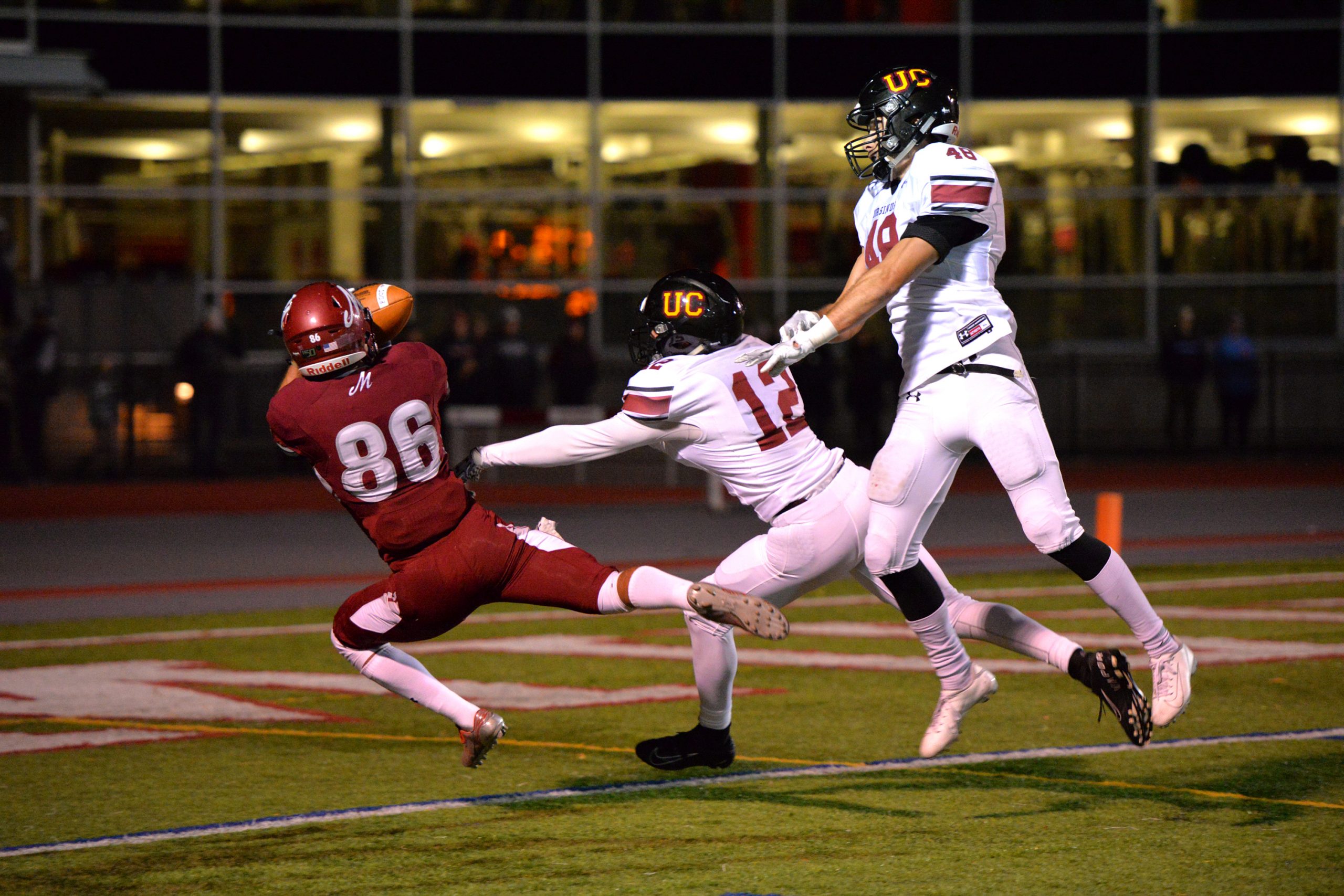 The Muhlenberg Mules football team moved to 9-0 with a win over Gettysburg on Saturday, clinching a spot in the NCAA Tournament and earning at least a share of the Centennial Conference title for the second straight season.

As the Mules have dominated opponents all season long and return the majority of their key players from last season’s Elite Eight squad, expectations are extremely high. Linebacker Kwasi Ampomah ‘20 exclaimed, “The expectation for this postseason is to win a national championship. We believe that this team is special and is the best in the country. A national championship is the ultimate goal for us.”

At Gettysburg, the Mules got off to a slow start offensively, despite gaining good field position early on thanks to a poor Gettysburg punt and a Daymon Fleming ‘21 interception. It wasn’t until the second quarter that Mules found the endzone when Michael Hnatkowsky ‘21 connected with Michael Feaster ‘22 for a 42-yard touchdown pass.

A safety and a Mitch Daniel ‘21 touchdown reception gave the Mules a 19-3 lead going into the locker room at halftime. Wide Receiver Nick Ugarte ‘21 acknowledges the adjustments made by the Mules during the second quarter as a turning point in the game, stating that “once we started getting hot offensively and defensively towards the end of the second quarter and after halftime, we were able to take control.”

In the second half, the Mules continued to execute in their passing game as Ugarte and Chris Hillburn ‘20 hauled in long touchdown receptions. The defense pitched a second-half shut out, and the Mules left Gettybsurg victorious with a 44-3 win.

As a defensive unit, the Mules rank number one in the conference, allowing just 10.5 points per game.

Gettysburg has one of the most intricate offensive playbooks in the conference, and the Mules were prepared to stop any potential big plays. Ampomah credits each member of the defense with making adjustments and executing their assignments throughout the game to prevent the Bullets from finding the endzone.

“Gettysburg has one of the most diverse playbooks in this conference and we knew that they would have something dialed up for us this game,” Ampomah said. “The way we combatted this was with our in-game adjustments and assignment-perfect football. Our mantra on this defense is to ‘do your job.’ That means not trying to make the big play and executing your assignment on the field perfectly so we don’t have any holes in our defense. After we adjusted and executed, we knew we could keep them out of the endzone effectively.”

Ugarte credits the offense’s resilience and ability to communicate effectively on the sideline as a key to victory over the Bullets after their slow start.

“When things aren’t going our way, it is important to gather ourselves and play like we know how to,” said Urgarte. “That’s exactly what we did. We talk[ed] on the sidelines as a unit and discuss[ed] what they are doing and what we need to do in order to start moving the ball. Once we sorted things out, we were able to get moving and kept it like that for the remainder.”

Next week, the Mules conclude the regular season with a home game against rival Moravian at Scotty Wood Stadium. Going into the final game, the Mules believe that they can finish the regular season undefeated and finish atop of the Centennial Conference standings. Ampomah and the rest of the team share the same belief that they have the abilities to finish the season with a perfect 10-0 record, along with a Centennial Conference Championship.

“We are very confident that this team will finish undefeated and win the Centennial. We have worked hard enough and have enough talent to finish perfect. I know that all my teammates think the same,” Ampomah said.

However, the Mules know that playing their top rival is no easy task, as the Greyhounds are seeking their first win over the Mules since 2008. After losing their first four games of the season, Moravian has turned their season around, winning their last four of five games and coming into Allentown with greater confidence.

Ugarte believes that a successful week of practice and consistent execution of assignments as a unit will propel the Mules to yet another victory.

“Moravian is always a tough matchup and a rival for a reason,” said Ugarte. “I am confident that if we continue to practice hard and execute like we have been, we [will be] a very difficult team to beat.”

The Mules kickoff against Moravian at 1 p.m. on Saturday, Nov. 16 with a Senior Day ceremony prior to the start of the game.