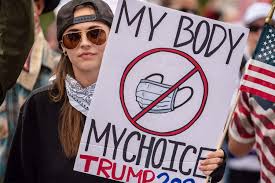 Of all the places I thought I would be beginning my junior year of college, a local grocery store was not one of them.

My job is simple: I circle around the store, picking groceries out for people who place their orders from home. It’s repetitive, but it passes the time. Plus, my workplace has been great at ensuring that employees are kept safe. We get our temperatures checked before every shift, our masks are replaced free of charge and every surface we touch is thoroughly sanitized.

However, the grocery store cannot control the actions (and at times, the incompetence) of our clientele.

A few days ago, I was walking around the store when I saw an elderly man without his mask. “Fine,” I thought to myself. “He likely forgot it.” I approach him and politely ask him if he would like a mask- our customer service department offers them to anyone who forgets.

The man looked at me, his mouth twisted into a snarl. “No,” he barks at me. He wags a finger at me and hisses: “I’m not a sheep. You are, because you’re the one wearing the mask.”

At first, I was almost impressed that he had the audacity to be that bold with me. He was brave enough to walk into a grocery store without a mask AND spew hateful propaganda at an employee? Well played, old man. Baaa, indeed!

The shock, however, quickly hardened into spiteful anger. Clenching the handle of the cart with my closed fist, I thought about going right back up to him and retaliating. I wanted him to grip the indisputable facts of this.

Nearly 200,000 Americans are dead with that number only continuing to rise. The COVID-19 pandemic is FAR from over; our federal administration has failed to implement testing and other mitigation strategies from day one. The only proven way of stopping the spread, is, you guessed it- mask wearing.  They work well- in fact, reports from the CDC say that earlier efforts by ALL Americans to wear a mask could have slowed the virus’s spread.

That old man’s act of so-called “patriotism” not only put himself at risk for catching COVID, but increased the likelihood of him giving it to someone else, too. How did he not grasp that? I wanted him to understand.

But of course, that wouldn’t do any good. I realize that these are extraordinary times; we are living in an age where scientific reason and fact are overshadowed by conspiracy and propaganda. Under this administration, the country remains divided. The country remains angry. Me wasting my breath fighting with an anti-masker would merely prove that exact point. I wouldn’t be able to have a productive conversation with someone who is set in his own ignorant ways.

So, I took a breath, walked away from my cart, and found the store manager.

The old man was thrown out of the store in under 5 minutes.