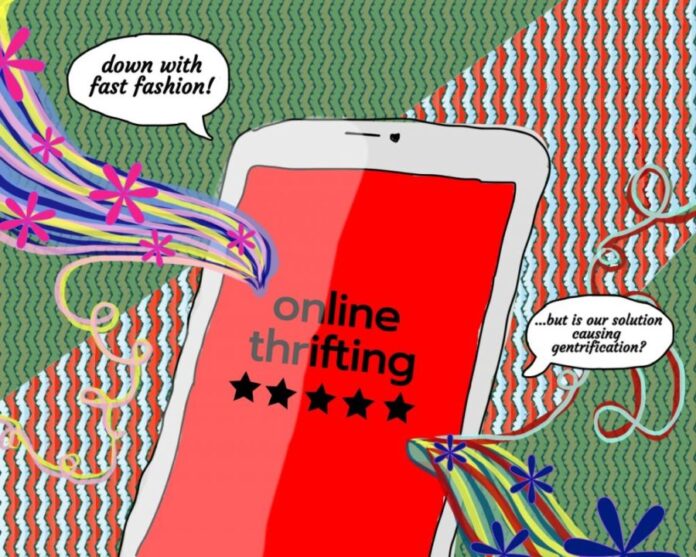 With the emergence of social platforms, such as TikTok, came this almost sudden appreciation of thrifting. It gradually became a trend to thrift clothes, possibly alter them and then post a haul online. Of course, this is appealing on so many levels: the clothes are cheap, peculiar in the sense that they can rarely be found elsewhere, and they are trendy. Thrifting has become an activity ascribed to those with idiosyncratic fashion styles—an appealing benefit that has allowed people to shop vintage clothes in the 21st century as a medium of self-expression.

Although with many advantages, thrifting is now being gentrified by affluent people who are well-capable of shopping elsewhere. Well-off people shop at these stores not because it is all they can afford, but because they have the intention to amend the clothes to fit a certain aesthetic or simply to join the trend. Meanwhile, some people solely shop at thrift stores because it is all they can afford.

Even worse, some shop at these stores only to resell at ridiculously high prices on online marketplaces like Depop. The disheartening ramification of this is an increased demand, which will inevitably lead to an increase in prices that are beyond the means of members of the lower class whose wardrobes exclusively depend on thrift stores.

Given the fact that kids are often mocked by their peers for only wearing secondhand clothes, it is incredibly hypocritical how the same people are now enthused by the idea of conserving natural resources through thrifting. Even before thrifting became socially acceptable, people like myself had spent their entire lives wearing secondhand clothes. I genuinely believe that statements like “I thrift, because it is good for the environment,” are only an excuse concocted by the upper class who thrift to rationalize the fact they are wearing already worn or tainted clothes. I see this as their way of keeping up appearances and saying to their peers, “I can afford to do better, of course, I just choose to thrift because it benefits our planet.” What they fail to understand is that it is not a matter of choice for many. Our environment has always required preservation, so why is that the vindication they adopted once thrifting became mainstream? I wonder if this urge to sustain the environment that suddenly blossomed within the upper class will remain if thrifting becomes obsolete again.

Perhaps the most contradictory sentence in this article is this: everyone should thrift. Thrift not because everyone is doing it, but with a sincere desire to actively participate in environmental sustainability. Thrifting is not an activity to be embarrassed about and devising a justification is only perpetuating the stigma that surrounds thrifting. To those who thrift only to resell at significantly high prices and with a “vintage” label even when the item is not vintage: please stop. Everyone deserves to afford comfortable and fashionable clothes regardless of their income level, and your unethical actions will eventually hinder that.