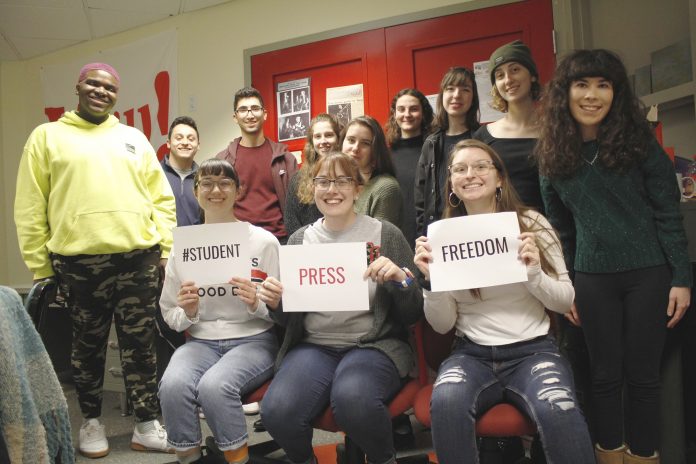 January 29 marked Student Press Freedom Day, an initiative started by the Student Press Law Center (SPLC) towards the recognition and expansion of rights for student journalists. On the SPLC’s website, there’s an emphasis towards remembering the past and revising the future, namely in terms of legislation. 1988’s Hazelwood School District v. Kuhlmeier Supreme Court case, for instance, is presented as a landmark instance of student disenfranchisement: when a student newspaper was blocked from publishing articles that centered on divorce and teen pregnancy, the students took action and sued.

Though various courts flip-flopped on their rulings, the Supreme Court ultimately decreed that the school’s censorship was constitutional — because the paper was part of a class, it was not a “forum for public expression” and hence could be censored on the basis that “a school need not tolerate student speech that is

inconsistent with its basic educational mission.”

Today, a nationwide student movement hopes to open the doors that were closed by Hazelwood v. Kuhlmeier case over thirty years ago. The New Voices campaign has influenced fourteen states to pass new laws protecting the First Amendment rights of student journalists — Maryland’s New Voices Law, for instance, protects students’ freedom of speech, even if their paper is sponsored by the school or part of a class requirement. The law even includes protection for student advisers against school-generated punishment and forbids school officials from limiting stories before they’re published, two features that are relatively unique even among states that have passed New Voices Laws.

Unlike its southern neighbor, Pennsylvania has yet to pass a New Voices Law. Though the state does provide substantial protection for student journalists in its Pennsylvania Public School Code, it falls short where Maryland’s code rises up: stories can still be suppressed pre-publication, and advisers remain vulnerable to administrative discipline. The New Voices PA campaign is working to change that.

But where, you might ask, does Muhlenberg fall on this sliding scale from restriction to independence? The answer lies in that all-important word in the Pennsylvania code: public. Since Muhlenberg is a private institution, many of the laws protecting student free speech don’t apply here — after all, the very definition of private schools exempts such institutions from most governmental mandates, along with governmental funding.

Still, despite its private school status, Muhlenberg has at least attempted to maintain an air of freedom when it comes to the expression of student voices — the school touted its involvement in a First Amendment Forum at Parkland High School two years ago, and has hosted Town Halls in the past that encourage students to air out their grievances to a listening administrative ear. Since The Weekly is a student-run organization not sponsored by the College itself, we are independent from its whims, but dependent upon SGA funding.

So what, for us, does Student Press Freedom look like? Here’s what our editors had to say:

It looks like telling the stories that are important to college students.

It looks like transforming ourselves into a vessel for student voices of all kinds — our Op/Ed section is always open — whilst adhering to our principles of respectful speech and inclusivity.

It looks like holding our administration accountable for their (in)actions.

It looks like the ability to tell the truth without worrying about the college’s public image.

It looks like sparking important dialogue within the community without fear of shame or constraint.

Overall, it looks like everything that The Muhlenberg Weekly strives to become. How can we get closer? Let us know!