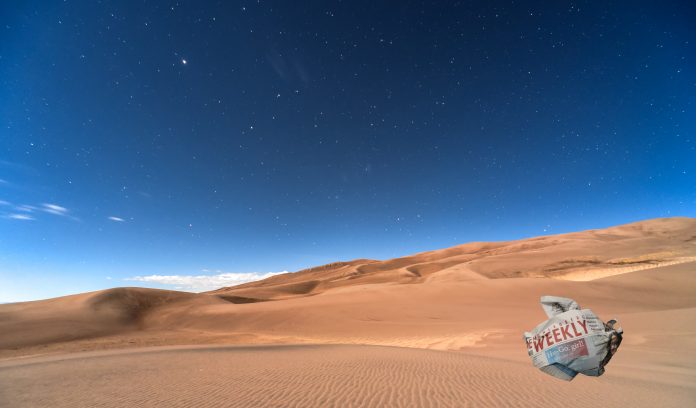 In the past few years, society has been collectively hiking through a so-called news desert. Within this desert, we run into many forms of dangerous territory, including cacti poking us with painful fake news and rattlesnakes hissing clickbait in our ears.

The catalyst of this news desert was the closing or merging of over 2,000 newspapers across the country. These pockets of desert land leave the community famished and quenching for local news coverage.

Through this seemingly never-ending drought, people wait tirelessly for relevant and accurate news stories to pour down from the sky.

But the drought doesn’t last forever, thanks to student journalism.

In Ann Arbor, Michigan, the community has been relying on the University of Michigan’s paper, The Michigan Daily, for nearly a decade now, according to a recent story from The New York Times. Over 300 student staff members cover news for both the school and the Ann Arbor community and deliver their paper five times a week to over 100 locations on and off campus; they also publish their stories online and currently have four podcasts.

While students at the University of Michigan continue to read stories pertaining to them, including one about the university stopping free STD testing, the Ann Arbor community is informed on community issues like cuts to the county’s mental health budget.

As student journalists in Ann Arbor balance their full course loads of schoolwork, other extracurriculars and report news for the paper, there is still an overwhelming sense that student journalists should not be taken seriously, despite them covering real issues and oftentimes bringing about real, serious change.

A high school paper in Pittsburg, Kansas forced the resignation of the principal due to discrepancies in her resume.

Another high school paper in Burlington, Vermont won a censorship battle against their principal.

Additionally, The Weekly has covered the closing of local businesses like Cafe Frais, a Statewide Town Hall on Redistricting, a more recent Town Hall by Rep. Susan Wild and a visit from the Lieutenant Governor discussing the legalization of marijuana. Each of these stories are not only beneficial to Muhlenberg students, but are also engaging for Allentown residents.

In each of these cases, student journalists are tackling real issues, and these real issues are bringing life back to the desert, or introducing life that has never been seen before. There is power in student journalism, and it is about time that we are given the credit we deserve for contributing to the community beyond the boundaries of campus.