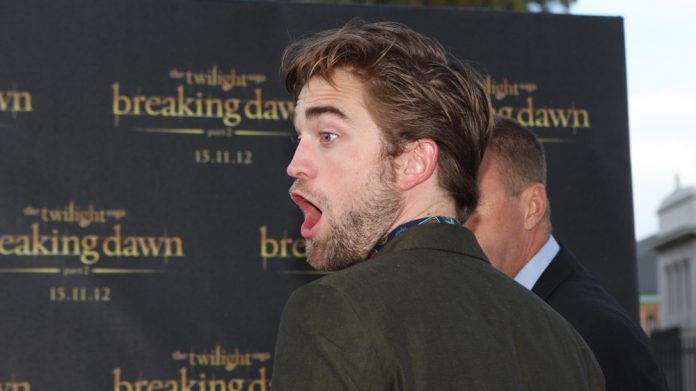 It started two Fridays ago. I was sitting in the dark vestibule of the AMC Classic — theater 14 — waiting for The Lighthouse to begin. Last Christmas trailers and A24 production logos flashed across the screen, and then, suddenly, there he was. Robert Pattinson, in 35mm black-and-white film, all (hold on, I have to Google this) six-foot-one (SIX-FOOT-ONE?) of him draped in wool and oilskin and tweed.

It was a perfect movie.

I went home. I looked up what the ending meant, as one does when one is totally normal and has zero negative capability whatsoever. As I scrolled through Twitter threads and A.V. Club articles and Letterboxd reviews, the same headlines kept popping up. Robert Pattinson Is Actually Very Good. Robert Pattinson is Twitter’s Latest White Boy of the Month. We Have Entered the RPats Renaissance. I Wish Robert Pattinson Was My Son. I realized I was living in the middle of a cultural moment — an epoch, if you will — and I also realized I didn’t want it to end.

I watched The King. Then I watched High Life. Then Life (regular), Good Time and Rover. These are just the titles that are built into my current streaming subscriptions for free. Tonight, I’m going to rent Damsel on Amazon Prime for $3.99. Eat your heart out, Jeff Bezos. (Seriously, I think you can almost get a bagel for that much on the Upper West Side?)

I’ve watched RPats’s interviews with Howard Stern and Jimmy Kimmel and Variety. I’ve seen him answer the Web’s Most Searched Questions with Mia Wasikowska. Late one night, I punched a Google Maps route into my phone that would direct me to the nearest Barnes and Noble so that I could buy a DVD copy of Twilight with his audio commentary on it. I am still looking into making this trip. I am also looking into having my own driver’s license revoked.

Am I “into” Robert Pattinson? Not really. Do I want to touch his hand? I dunno, maybe to read his palm or something, if he asked. Do I daydream about locking eyes with him across a crowded room at a house party in BedStuy and knowing, in that instant, that one day he’s going to compose a song about me on his Suzuki Omnichord? No, thank you! Any RPats-related fantasies I might have are strictly limited to, like, us participating in the same MFA program and not speaking to each other until the day we graduate, upon which we exchange a firm and respectful handshake. Or him living in the studio apartment above mine, à la Breakfast at Tiffany’s, except instead of falling in love we simply maintain a pleasant, neighborly banter and also he doesn’t make any footfall at all.

I like his nonthreatening, waifish presence. He thinks method acting is for d-bags, and he was suspended from elementary school for trying to stop kids from killing snails in the parking lot. He’s a nice boy!

He’s weird. He’s different. He wrote, directed and starred in a two-and-a-half-minute psychological horror-thriller about his quest to find a hot dog in New York City. He doesn’t fit in.

And yet, there’s nothing special about him at all. He’s a white guy in his twenties in Hollywood. His skincare routine probably costs as much as three of my student loan payments. He probably eats exclusively at Momofuku Gold Bar, the secret 14th Momofuku establishment where all the food is made of gold, and also it only exists inside my dreams. You have to astral project to get in there. They don’t even let me in there. His net worth is probably Yes.

Maybe it’s this: it is nice to imagine a world in which all the men of Robert Pattinson’s demographic are Robert Pattinson. Maybe that’s why I’m trying to see him in as many roles as possible. RPats as an astronaut. RPats as a cowboy. RPats as the Dauphin of France. RPats as Georges Duroy in the Magnolia Pictures adaptation of Guy De Maupassant’s Bel Ami — oh, I almost forgot, I watched Bel Ami, too. Even Robert Pattinson as a criminal has certain charms. In Good Time, he plays a conman named Connie Nikas (a conman named Connie! poetic cinema!!!) with a heart of gold that just makes you think, “Shucks, I’d let this guy grift me any day.”

I want to live in that world! A world full of jovial weirdos in expensive jeans. A world in which I, a nervous little lassie all alone in this big scary world, could finally rest easy in the knowledge that Men Are Okay Now. Not necessarily good, but certainly not bad at all. A world full of Roberts.

So, my favorite RPats movie so far? It’s gotta be High Life. I mean, directed by Claire Denis? Have you SEEN Beau Travail?! Anyway, look forward to my next article, in which I rank every character Robert Pattinson has ever played in order of how much I want to invite them to my birthday party.

Working at a Grocery Store During the Anti-Mask Movement