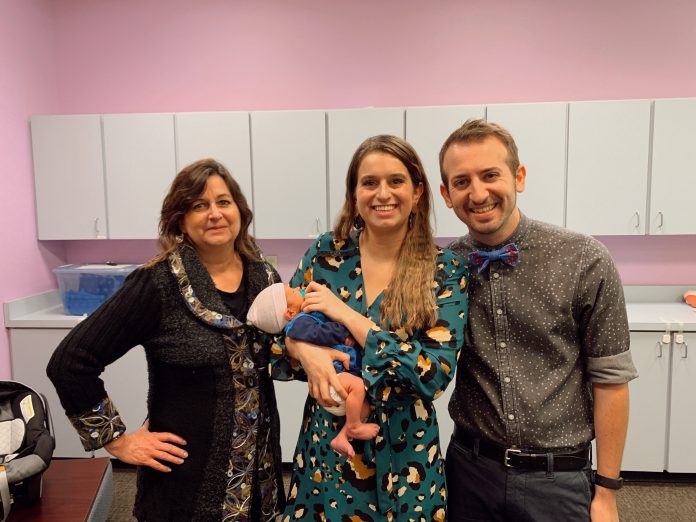 I categorize moments in my life by what type of punctuation I would title them with. Periods are for the things I know: the routine and expected. Exclamation points are for the big ones, good and bad. Question marks hang above the times I don’t know what will happen next.

I used to live a life of periods. It was not a bad one — sentences filled with joy came before most of them. Seven seats were all we needed for Thanksgiving dinner. Once a month or so, my brothers and I would spend the weekend in Long Island with my grandparents from my dad’s side, my Poppa teaching us how to take photos of flowers and my Grandma waking us up early for IHOP. My mom was adopted — raised in Brooklyn, New York, by an incredible woman named Sylvia, my Nana, who passed away when I was a baby. Sundays were always for Brooklyn, where my mom’s Ukrainian cousins would feed me and my brothers, Alex and Simon, until we couldn’t move anymore. An unpredictable exclamation point added a new layer to my life when my mom sat me and my brothers down when I was 8 years old and told us that she had found her birth mother, Betty. She took a trip to meet her, and come Thanksgiving 2006, we added an eighth seat to the table. I was immediately entranced by Betty, an older, queer woman from Alaska who loves to quilt and makes the same jokes I would as an 8-year-old.

There’s this word in Judaism called dayenu, and it translates to “it would have been enough.” Getting to add Betty to my life would have been enough. But my mom kept researching, sipping her always-full cup of tea at the kitchen table as she tried to figure out a family tree she never knew she would have the roots of. As the years went on, the line “I found a new cousin today!” became normal. And dayenu! that would have been enough, but I’ve met my cousin Mela and her sister Shondra in California and spent Thanksgiving in Alaska with my cousin Denise and her family. Dayenu, dayenu, dayenu! When my parents separated and my world became rocky, home was a tough word to point at my house and say “there’s mine!,” but our story kept growing. Meeting one cousin always led to the introduction to another. My mom and I attended Mela’s wedding last fall with Betty and her wife, Karen. We met my cousin Paige, her parents and two sons in Texas when I was in their town for a conference. I collected these exclamation points and kept them in my pocket, holding tightly to the unexpected.

In April of this year, I got a Facebook invite to join a group chat of 25 people, including my mother, Betty, my brothers, Denise, Mela and Paige. A cousin I had never met before introduced herself and said that they’d all been talking, and they want to meet us! Fast forward to fall break, after hundreds of chats and dozens of payments to a beach house. Suspense greeted me with each stair I stepped on as I made my way up to the house, holding my mom’s hand. Question marks flooded my mind. But the dramatic piano ballad in my head was drowned by an excited “COUSINS!” as we appeared on the porch with our cousin Densie. Deja vu doesn’t do it justice, but these people immediately felt familiar. “I’m so glad you’re ours,” said Joanie, the oldest cousin, before pulling me inside for chicken and dumplings.

Have you ever woken up and immediately been greeted by 13 Southern women telling you how much they love you? I highly recommend it. For four days, they taught us family recipes, swapped stories and stayed up until 2 a.m., using stolen time in an attempt to make up for the years we missed. I couldn’t believe that some people just have this; they’re just born with family traditions and memories and dinners. When we left, we all pinky-promised that we’d have a longer and bigger reunion this summer. This is one side of my mom’s story — and both are beautiful. I consider the pelmeni and borscht that my Brooklyn cousins make for us my family recipes, too. The stories of Nana inspire me to be courageous and confident. From every angle, adoption is the biggest thing that’s in my blood; I can point at Brooklyn and Allentown and Texas and Alaska and Portland and call it home.

Dayenu! It would have been more than enough … but I am writing this from my brother Alex’s kitchen table in Ohio. It’s 2 a.m. My mom and I drove seven hours today because last night, Oct. 25, my brother and his husband (also Alex!) adopted a newborn baby boy, their son, Ezra Aviv. He will grow up in a home where lost and found are for missing toys and clothes, not parts of himself. Last month, I didn’t know I’d be packing a suitcase to meet my nephew, but the best moments in that photo album of my brain are the question marks that have turned into exclamation points and the exclamation points that have turned into periods, because they are solid layers of who I am and who I can call family. There is no question mark or period or exclamation point over Ezra’s story being woven into all of ours. Becoming an aunt has added a new form of punctuation to my toolbox; Ezra has an em dash (—). I cannot predict the unknown or routine or wonderment of his life, and that’s pretty incredible. His story — just beginning, sacred, ours, his, forever.