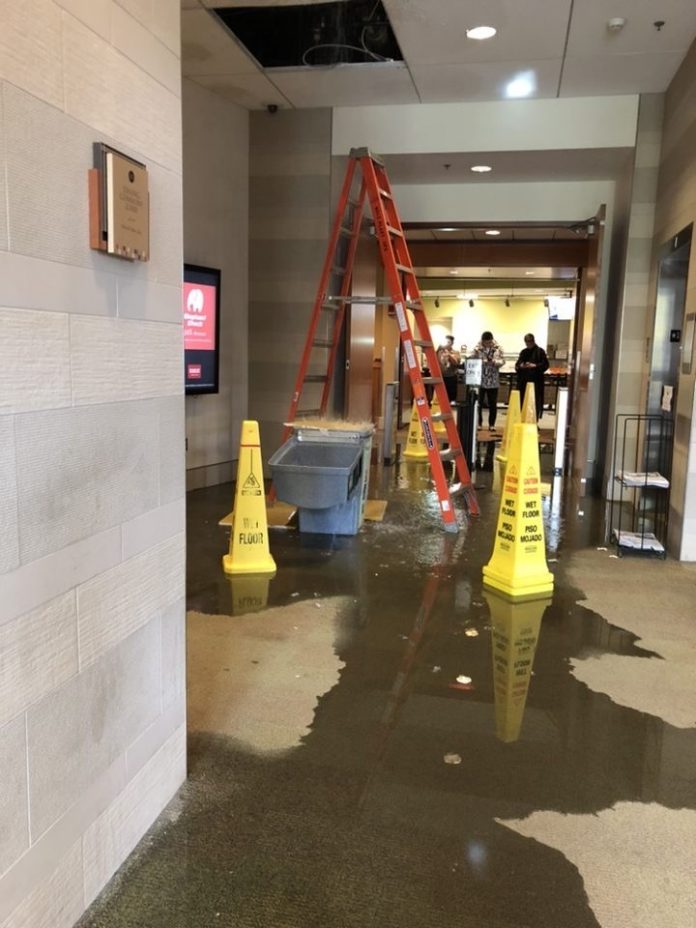 Roommates Alex Bak ‘22 and Sarah Zulewski ‘22 were enjoying a rather normal Saturday morning breakfast in the dining hall last weekend. It was about 10:15 a.m., early enough that the conversations were just the right amount of peculiar, but late enough that they were not the only ones in the room. As the pair were deep into a conversation about furbies, they were suddenly interrupted by an unexpected and startling sound.

“We heard a noise kind of like cracking coming from the swipes, and I thought they were setting up some food by the door like they sometimes do,” recounted Zulewski.

Bak also described the noises as sounding like “running water or a sizzling fire.”

“But then we heard a loud crash and the sound of rushing water, and I saw people getting up and moving towards the entrance to the swipes,” continued Zuleswki. “Alex got up to get a better view but I could see it all perfectly: gushing water from the ceiling and a large pool forming on the surrounding carpet below.”

Upon seeing the flooding, the roommates decided to put their dishes away and try to leave the dining hall as soon as possible. They noticed that water had also been dripping right in front of the dish return, so they stepped to the side.

They described how many of the students, themselves included, began to take out their phones and document the scene.

“we heard a loud crash and the sound of rushing water, and I saw people getting up and moving towards the entrance to the swipes”

“Just before Alex started taking a Snapchat video of the whole event, another large chunk of ceiling tile fell right where Alex and I had been standing moments before as we returned our dishes,” explained Zulewski. “So that could have been real bad if we hadn’t moved over that couple feet.”

Hector Chen ‘23 also witnessed the impromptu waterfall and proceeded to record it on his phone.

The video, captured in slow motion, shows a tile falling from the ceiling outside of the dining hall, releasing even more water into the already overflowing bucket.

As the tile falls, it triggers an even larger splash of water, continuing to flood the space.

“[It was] lucky no one’s beneath that [tile],” Chen said, commenting on the danger of the incident.

While nobody was directly under the tile, Connor Baker ‘22, who was exiting the dining hall at the time, is seen in the video standing directly next to the falling tile.

“It was a weird experience of seeing it,” explained Baker. “I was very confused about when I started feeling wet, and then I looked up and saw the ceiling leaked. It was a surprise to me because I have never done or seen anything like that. I decided to watch it for a while and then left to do work.”

While the sound of the running water and falling tiles was loud for dining hall visitors, Eva Nelson ‘20, who was sitting in GQ at the time, noted that she could not hear it from the other side of Seegers and was only informed of the situation through a text from a friend.

Jim Bolton, Director of Plant Operations, provided insight into the nature of the circumstances.

“With our HVAC [Heating Ventilation and Cooling] mechanical contractor, we have a very detailed PM [Preventative Maintenance] system in place,” Bolton explained.

“Unfortunately, when you are dealing with mechanical systems, breakdowns do occur,” he added.

The system has since been controlled, though stains from the water damage can still be seen on the ceiling.

“All in all, it was [a] very eventful morning,” reflected Zulewski.