Home BergBeat BergBeat 7 Is it okay to be selfish in a pandemic? 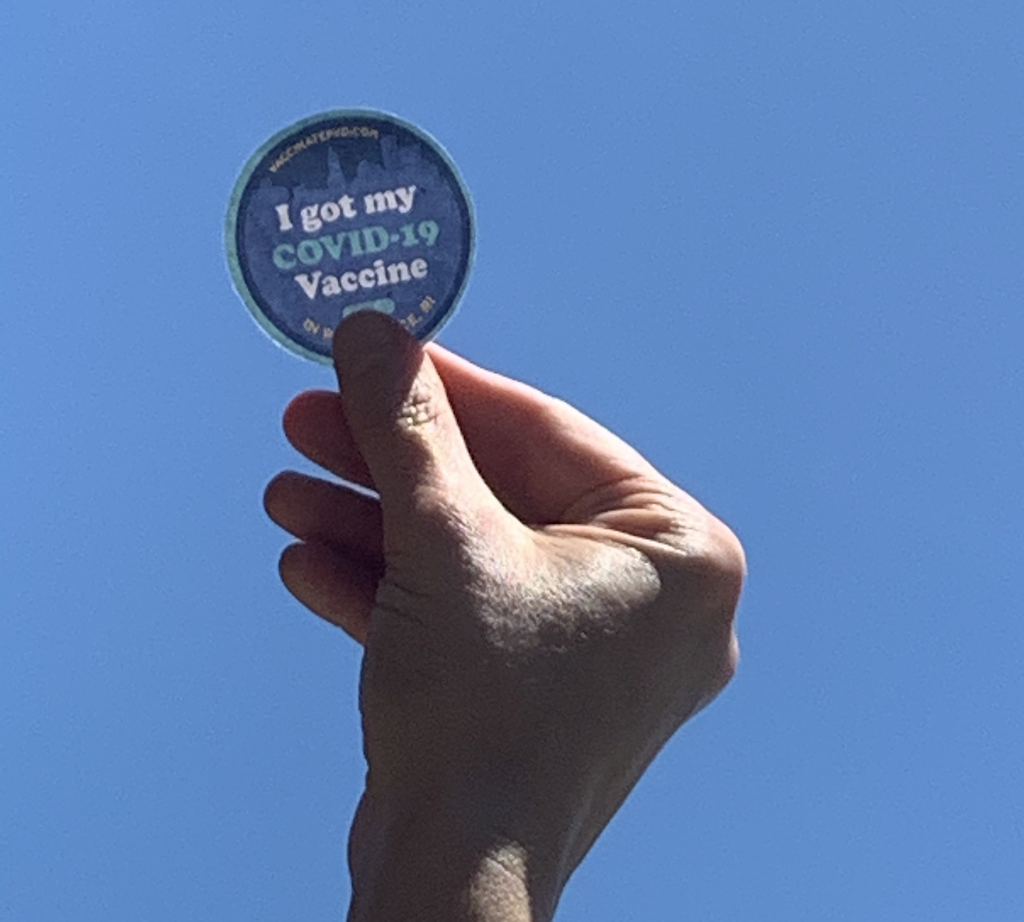 Once the race to develop a vaccine for Covid-19 was complete, another race began. The phased vaccine rollout in the United States was supposed to allow those most at risk for Covid-19 to get the vaccine before those less at risk. But just because something is supposed to be a certain way doesn’t mean it will be.

At the beginning, elderly people and healthcare workers who sacrificed their health for the well-being of others during the pandemic were inoculated while the rest of us waited, but that did not last long. The lines between who was truly high-risk and deserving of getting the vaccine early began to blur. People with more resources, those who could afford time off from work or had access to technology were able to book appointments or could show up to a vaccine clinic without having their eligibility questioned. At Muhlenberg College, where every student has access to a computer, either a personal laptop or one at the library, students began getting vaccinated before they were technically eligible.

Mikayla (Miki) Lazowski ‘22, knows she was fortunate to have her mother help her schedule an appointment for the end of February 2021. “She had to wake up at 4:00 a.m. to get me a vaccine appointment,” says Lazowski. Lazowski explained that she was eligible because of her position as a student-teacher and her upcoming summer job. “When I walked into the fairgrounds they didn’t ask me for eligibility proof,” says Lazowski, which is what has allowed so many to get the vaccine before they became eligible in their respective state.

Aleeza Solomont ‘22, also received help from her mother in obtaining her first vaccine dose. While home in Boston for an extended period of time due to being contact-traced by the college, Solomont’s mom “heard through the grapevine about a clinic that popped up near my home that had extra vaccines and they were just giving it away because they had so many free appointments.” Her mom soon received a call from the clinic informing them of available appointments that needed to be filled.

These two individuals represent a larger pattern; those with more access have had an easier time obtaining the vaccine. Having a parent who can take the time to book appointments for their children, especially when appointments were limited, has been a luxury during this process.

“When I went for my first dose it was all elderly people with me,” said Lazowski. “And that made me think to myself, ‘I’m the only young person here, oh shoot.’”

It was not just older adults who were not as technologically savvy as some younger individuals that had trouble securing a vaccine in the first few months of the vaccine rollout.

The disparities between those who have gotten vaccinated or did so earlier on, and those who have not been vaccinated or struggled to secure a dose in the early phases, can be significantly attributed to socioeconomic factors. Of the 30 million Americans who are willing to get vaccinated, higher household income brackets correlate to higher rates of vaccination. The systems in place that have long worked in favor of the wealthy and against the poor have made time even more valuable throughout this process.

More than ever, time has been of the essence and communities that have more of it have been better off. Time is certainly not the only element that has helped some and been a barrier for others, but it is absolutely a reflection of additional resources.

Many communities that face other structural or attitudinal barriers struggled to get the vaccine early on despite wanting it.

While many Muhlenberg students did not cheat to get their vaccine, the issue of eligibility does not answer the question of whether vulnerable communities were prioritized.  Did initial distribution efforts directly address the challenges to access? What happens when we, as a society, do not prioritize those who are most vulnerable?

To help remove some of these structural barriers, the “Bradbury-Sullivan LGBT Community Center was proud to lead the statewide advocacy effort which succeeded in Pennsylvania prioritizing people living with HIV for Phase 1A of the vaccine,” said Adrian Shanker ’09, executive director of Bradbury-Sullivan.

“Despite this important victory for people living with HIV, we still witnessed access challenges for LGBTQ, BIPOC, and disabled communities,” said Shanker.

The Bradburry-Sullivan website explains that health disparities such as being less likely to get medical care access and compromised immunity as a result of existing health inequities has put LGBT individuals more at risk for Covid-19.

“That’s why [we] partnered with Lehigh Valley Health Network starting in March to offer vaccines at an LGBTQ community clinic. So far [May 15] more than 1,000 shots in arms have been delivered at Bradbury-Sullivan LGBT Community Center,” said Shanker. Vaccine information and messaging is crucial in getting the public vaccinated, especially for those who face language or attitudinal barriers.

“By utilizing trusted messenger strategies to both promote and distribute the vaccine we were able to address barriers to care and hesitancy for LGBTQ+ people,” said Shanker. It is clear that these strategies work, and the efforts to vaccinate LGBT individuals at the community center have helped with overall vaccination rates. Continuing to support centers such as Bradburry-Sullivan in order to achieve health equity in historically underserved communities is a crucial step in increasing access.

In a research project that is actively monitoring the attitudes and experiences with the Covid-19 vaccine, The Kaiser Family Foundation (KFF) reports that “more than half (55%) of unvaccinated Black adults and almost three-quarters (64%) of Hispanic adults are concerned about having to miss work due to vaccine side effects compared to four in ten White adults (41%) as of April 21, 2021.” In nearly every other item that asked about moderate or high levels of concern regarding the vaccine, the percentages of those surveyed were higher among Black and Hispanic adults than White adults. Many of the questions were access-related.

Muhlenberg is a predominantly white college with white students making up about 73% of the population in 2019. It is also an incredibly wealthy school, where the median family income for the class of 2013 was $188,300, according to a comprehensive study done in 2017.

Many of the students at Muhlenberg have had more access to vaccine information, clinics, and other resources that make getting the vaccine easier and less stressful. For the students that did not get their vaccine before Pennsylvania deemed every person 16 and older eligible on April 13th, Muhlenberg held multiple on-site clinics, with their first being on April 16th. “Just prior to the clinic, the J&J vaccine was recalled,” explained Jill Walsh, the Vice President of Human Resources for the college who helped organize the clinic. “We were fortunately able to work with the provider to secure the Moderna vaccine instead, and the provider was able to come through with significantly more vaccines.” Young, healthy individuals need to get vaccinated too and it is a privilege that the vaccine came to us.

“I was definitely frustrated,” said Solomont when asked about students getting vaccinated before they were eligible. “My mindset regarding vaccine rollout was that we all have to wait our turn in order to make this process work. When everybody started getting vaccinated when they weren’t eligible and lying about it I thought it was incredibly unethical.” People who have wanted the vaccine from the beginning faced a dilemma. Do I prioritize my health over the health of others who need this vaccine more than I do? Or do I wait my turn and get my vaccine ethically? And, being eligible does not necessarily guarantee access to the vaccine.

“I would like to think that most people waited, or were “technically” eligible, before signing up for a vaccine appointment. For me, that’s a little bit more acceptable than completely lying. I know personally I was not comfortable lying,” said Lazowski. When someone suggested to her that she identify as a smoker to get the vaccine earlier, Lazowski said no without hesitation.

While Lazowski received her first dose fairly early on because of her position as a student-teacher and employment status, she would not have tried to get it early on if she did not qualify for it. Not everyone shared that sentiment.

“I would ask people why they were skipping the line to get the vaccine and they would always say that they just wanted or needed it,” said Solomont. But, how did people really determine if they “needed” it? Does “wanting” the vaccine justify taking away a spot from someone else who potentially has fewer resources and is more vulnerable to the virus? While some individuals were undoubtedly left out of the prioritized groups, the people Solomont was referring to are not them.

American society is undoubtedly, and always has been, individualistic. When people are selfish, are their actions just a reflection of their upbringing in this society? How can we expect people to be less selfish and more compassionate towards those less fortunate than them when individualism is embedded in our daily lives? Most importantly, we need to ensure that in this very individualistic society we create health policies and guidelines that emphasize equity and thus enable us to change the systems laid bare by this pandemic.